It's crazy how just two years ago today I was faced with the scariest, most exciting, and rewarding challenge of my life. Becoming a Mother.

24+ hours after I had went into labor, and two weeks ahead of schedule, Greyson Cooper Williams graced us at 3:04am on March, 6th, 2013.   Those two days will go down as the two most hectic, exciting, scary, and rewarding days of my life.

It was the last snow storm of 2013. I remember waking up at 2:30 in the morning realizing (or assuming) my water had broke, contractions were steady, and I had this feeling that it was time.  I however, didn't want to go into the hospital just yet, so I laid back down.  At 7:30 AM I was still having contractions, so I shook Seth awake.  His reaction was priceless.  "Really? I don't think you are, but we can call the doctor and check just in case."  The call to the doctors office resulted in us coming in to make sure I was indeed in labor. "We should probably bring the hospital bag." I remember adding.  "I don't think we'll need it." Seth said confidently.  His famous last words.  The doctors confirmed that I was indeed in labor.

Side note: Not only was I pregnant with Greyson, but my sister-in-law Jenna, was pregnant with twins.  They were due a month later then Greyson.  It was a running joke that we would end up delivering them on the same day.  Wouldn't that be something? Our small family, growing from no grandkids, to three all on the same day.  What a story that would make.  Jenna actually had a regularly scheduled appointment that day, and we received a call of congratulations and excitement from my brother-in-law, Jack, while they were on their way.

Fast forward to hour 5, Pitocin was prescribed to help speed up my delivery.  (And by the way, everything said about pitocin holds true.  It sucks!) The next 5 or 6 hours were the worst.  Contractions intensified, but Greyson just wasn't ready.  Then I made the decision that changed everything.  The Epidural.  I will never forget the relief that came over me.  Ahhhhhhh.  I could finally breath and I even took a nap!  We updated friends and family on the progress of our little blessing, and were as happy as a clams.

8:00 PM rolls around, and we receive a phone call that Jenna was going to have an emergency C-Section by 9:00 PM.

Yes, you read that correctly. I remember thinking, "There's no way she's having the twins before I have Greyson."

Keep in mind, I'm at Mon General, it's the last snow storm of 2013, and Jenna is at Ruby Memorial, separated by a half a mile, as the crow flies.  The whole situation is straight out of a Lifetime movie.  My mother and father-in-law, Becky and Jack, were beyond elated and most likely overwhelmed, driving back and forth between hospitals, checking in on us both as we prepared to welcome three new lives into this world.  My parents, who reside in Northern Michigan, started the 9 hour trek to West Virginia.  They were about 4 1/2 hours away.

I was in the early stages of delivery, when the official announcement of the twins arrival was given:

By that time I was 19 hours into labor.

After 24 1/2 hours of labor, we welcomed Greyson Cooper into this world.  At 3:04am, on March 6th 2013, our lives changed forever.  Love that only a parent can know rushed over us.  Although, we thought we were prepared to have a baby, once we saw that 7 lb 3 oz miracle, all that we thought we knew and had learned flew right out that hospital window.  We were the proud parents of this little fella, and were about to embark on a journey with the greatest gift God gave man, a child.

So in the end, Greyson was born approximately 4 1/2 hours after his cousins, Reagan & Aiden, on March 5th and 6th.  We had one, they had two, and Seth's parents got three grand children in less 5 hours.  Wheew!  What a couple of days.  Oh, and just to make it even more special, Alana Pratt, second cousin to Seth, was born just two days before on March 4th.

Greyson has been such a blessing!  He always keeps us on our toes, and we never knew how much we could love someone!!! 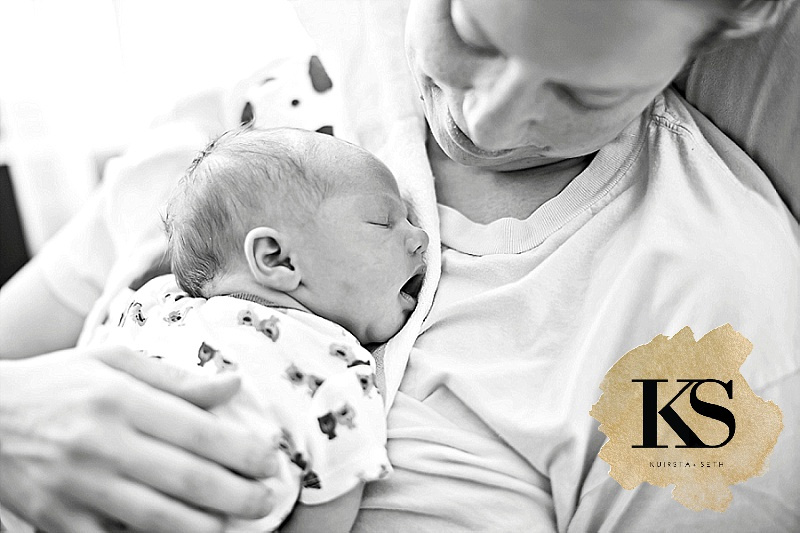